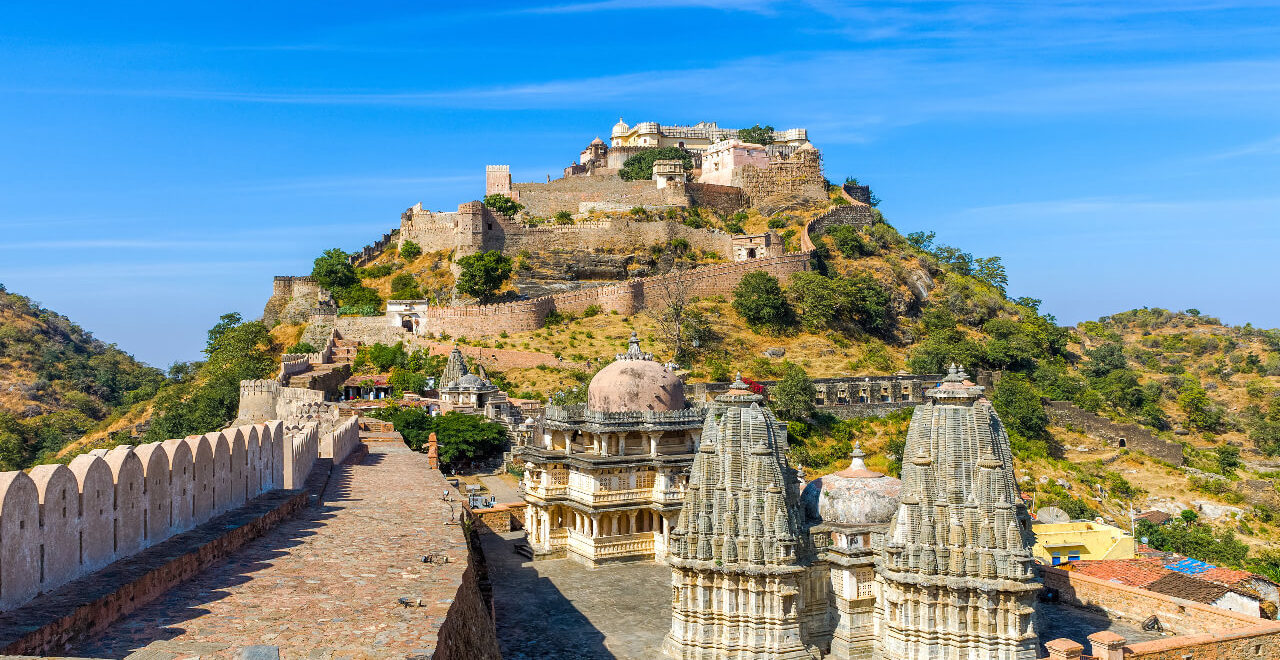 Kumbalgarh Fort is India’s second largest fort — and one of the world’s largest fort complexes. Kumbalgarh is a UNESCO World Heritage site near Udaipur, Rajasthan and a must-visit while in North India.

Kumbalgarh Fort was built in the 15th century under the supervision of Rana Kumbha of Mewar Kingdom. Construction of Kumbalgarh Fort took about 15 years, and when you visit you can see why. The outer wall is more than 38 kilometres in length, and 15 to 25 feet in width. Kumbalgarh’s wall is often referred to as the great wall of India. It has multiple turrets/firing positions to deter any enemy advances.

The location is extremely strategic: 11 peaks of the Aravali hill range provide a natural defense against intruders. Kumbalgarh Fort was so impregnable that it was never conquered. The only known exception is when Mughal rulers poisoned the water source around the fort and managed to capture the fort by deceit.

A large fort complex needs massive entry and exit gates, and foolproof security. Kumbalgarh’s seven main entrances (locally referred to as Pols) are heavily fortified gateways that were built to monitor and control access to the fort. Pathways are wide enough for about eight horses to walk side-by-side and they have sharp turns, several defense positions, and traps all designed to deter enemy advance.

Ram Pol and Hanuman Pol are the most prominent entrances to Kumbalgarh fort. Imagine being an enemy soldier attempting to break through these entrances while being attacked from above. You wouldn’t want to be on the wrong side of the gate.

Inside the Kumbalgarh fort complex you will find more than 360 Hindu and Jain temples. The most prominent ones are Neelkanth Mahadev Temple and Parsvanath Jain temple. The sheer number of religious places gives a hint about the number of residents who would have called Kumbalgarh their home. The two-storey Kumbha Palace is the main royal residence inside Kumbalgarh fort. Kumbha Palace has a grand darbar hall, and two residential sections: one for men (Mardana) and another for women (Zenana). Kumbha Palace is decorated with beautiful murals and offers mesmerizing views of the greenery and hills around. There are also several other buildings and attractions inside the Kumbalgarh fort complex worth seeing.

Kumbalgarh Fort was in use till late 19th century. If you were a resident of this fort, I am sure you would have felt absolutely safe inside. It’s an incredible experience — to tour an ancient fort like Kumbalgarh, surrounded by strong fortifications, dotted with iconic temples and palaces, and rich with the history of a bygone era. Take a walk on the fort wall and soak in the natural beauty of the hilly landscape. The view is particularly romantic post monsoon.

Read the Complete Guide to Places to visit in Rajasthan to discover more incredible places to see in this amazing state.